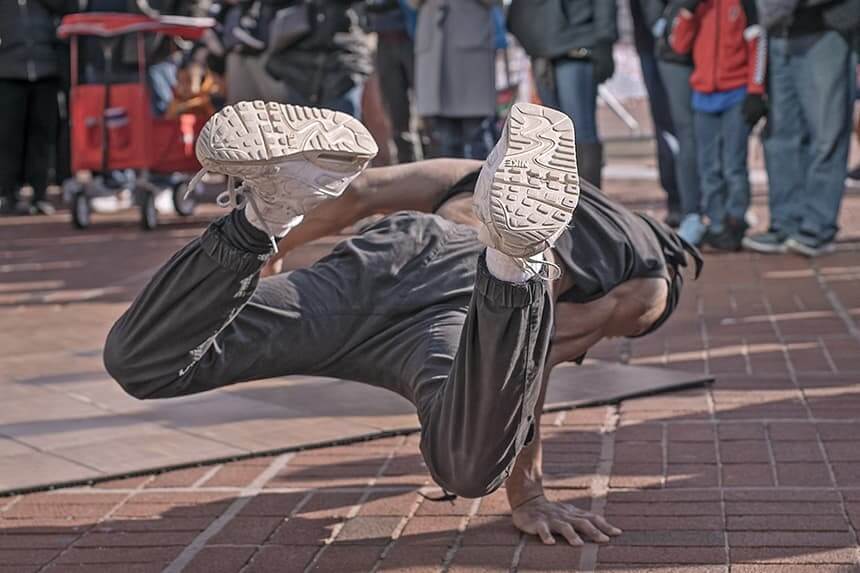 It is nearly impossible to accurately rank the top street dancers in the world, as each has their own distinct style and talent. While there are many skilled street dancers today, some have made a particularly significant contribution to the hip-hop scene and have become a part of its history. These iconic figures in hip-hop dance culture are widely recognized and respected within the professional dance community.

Therefore in order to broaden understanding of dance culture in general, we have created this list of the best and most popular freestyle, hip-hop, and break dancers in the world. This is not a ranking, and we have not given anyone a place. We merely offer to get acquainted with the iconic figures as one of the best hiphop dancers. So let’s begin!

The best hip hop dancers in the world

This list starts with the fathers of hip-hop dance culture and continues with modern and outstanding professional hip-hop dancers. Buddha Stretch was one of the first to promote Hip Hop on the world stage. He was the one who took the popularity of hip-hop to a totally new level, in particular with the help of music videos. Also, it is believed that he started the so-called freestyle hip hop, which combined Old School and New School hip-hop dance. Later on, Buddha Stretch assembled a dance team of the best freestyle dancers named Elite Force and even worked with the most popular artists of the world.

While Buddha himself says he never planned to pursue dance and hip-hop professionally, it became so all-encompassing that it completely consumed him. Steffan “Mr. Wiggles” Clemente is a virtuoso performer of Bboying, Locking, Popping. The first mentor who introduced Stefan to the techniques of the emerging dance culture was his sister Wanda. She taught her little brother elements of the popular at the time Rockin dance. After that, he took up the study of top-rock and break-dance.

Soon Mr. Wiggles gets into the Rock Steady Crew. It was great luck and a good start for a novice dancer. After that he receives an invitation from another core group of funk and hip-hop culture – The Electric Boogaloos and he accepts it gratefully. He becomes a very popular hip-hop dancer in the ’90s and ’00s.

A hip-hop veteran, the New York Bessie Award winner is still in great shape today. He passes on his skills to young people at numerous masterclasses and takes part in the creation of educational films. Les Twins – Larry & Laurent Bourgeois – are the most popular brothers who have become popular not only among dancers but all over the world. After watching the performance, even a person who is not connected with the choreography surely wants to try his hand at hip-hop. Because the guys’ dance is so beautiful that it involuntarily mesmerizes.

The brothers learned to dance from watching their idols on TV and then on the streets of the city. For the first time, people started to talk about these young Frenchmen in 2008, after their performance at the international dance contest Juste Debout. At the beginning of 2011, they became the winners of the popular talent show and won the hearts of the audience for good.

They have starred in advertising campaigns for companies such as Adidas, and have also worked extensively with popular artists, both as dancers and as choreographers.

To date, Les Twins have toured dozens of countries with master classes and performances. They are still very popular to this day, and in 2019 they even starred in Men in Black International. The hip-hop performer and choreographer from the United States is now considered one of the best dancers in the world. He started dancing at 15, and at 16 he founded his own studio in Houston. At the same time, Philip is an engineer-physicist. Popularity came after participating in the dance show “So You Think You Can Dance”. In 2010, together with Dee (Moon) Zang created the team I.aM.Me, which became after winning the show “America’s Best Dance Crew” one of the world’s strongest hip-hop dance groups.

Pacman travels around the world with his workshops, regularly participates in dance shows, and puts on plays for Hollywood movies (for example, he participated in the filming and staging of plays for Step Up Revolution and Step Up All In).

Nils Robitsky – Bboy Storm – has been presenting HipHop and Funk styles since 1983 and is one of the leading dancers in this field. Popping, Locking, and Bboying have made him world-famous. This legendary man is honored with the title of the founder of breakdancing in Europe, along with some other famous breakdancers.

He won many breakdancing competitions in the nineties. In addition, he hosted the HipHop Magazine “Freestyle” on the German TV channel Viva. But by 1996 the work on the magazine “Freestyle” ends and something new begins. The name of the conceptually new and successful Berlin-based project is: “STORM and Jazzy Project”. A couple of gorgeous productions in the format of this project opens the door for STORM to the best halls of the world.

Besides all of the above, Niels worked on another creation – a book about the evolution of break and the history of breakdance in Germany.

To this day, he actively teaches, puts on performances, and conducts numerous master classes in breakdancing, popping, and locking.

Ashley Banjo is an English street dancer, choreographer, and actor. He started dancing as a child. He is the leader of the Diversity Dance Company, which he organized with his younger brother in 2007. They gained huge worldwide popularity after winning the third season of Britain’s Got Talent in 2009. After that Ashley participated in many television programs both as a member of the jury and as a guest.

Today Ashley is one of the most popular media dancers in the world, thanks to his participation in many television shows. He has 1 million followers on Instagram, and Diversity continues to successfully perform and win the hearts of fans. Ashley Banjo is an official ambassador of the United Dance Organization.

This is a list of famous hip hop female dancers who have conquered this not always easy and forceful style of dance. Look at how they dance and what they have achieved in the field of professional street dance. Then you will never be able to say that it is “not a woman’s” dancing. This American is known primarily for her unconventional choreographic approach, all of her dance productions are the embodiment of the brightest and most interesting hip-hop features.

She began dancing, like many people, while still in high school. She experimented with different dance styles, which influenced her own style so much. Pursuing her dream of dancing, in 2002, she left her main job completely and put all her energy into perfecting her skills. She was able to fully dedicate herself to dance and choreography. Her efforts have not gone unnoticed.

Today she has already worked with major brands and many world-renowned artists. She teaches at the world-famous studio in New York City – Broadway Dance Center as well as gives master classes all over the world. She is one of the permanent teachers of Monsters of Hip-Hop along with such dance stars as Nappytabs, Marty Kudelka, Kevin Maher, etc.

Besides choreographic activities, Luam also hosts a podcast and an Instagram blog where she discusses important social topics and issues in the dance world. Bgirl Logistx is a young champion with great promise. Her real name is Logan Edra. Logan has been breaking since she was 9 years old (since 2011). In 2016, the family even decided to move to Los Angeles for Logistx to expand her dance prospects. Her first and main team is Underground Flow. In 2018 b-girl Logistx won the Silverback Open B-Girl Solo, after that win the world noticed her completely.

Besides breaking, Logan practices other styles of dance, such as hip-hop, and teaches commercial choreography, applying that knowledge to breaking. Logan believes that this makes her style special.

The young girl with the cute appearance turns the dance floor upside down, makes incredibly complex mouves – it amazes the audience time and time again.

Marie is a member of the trio Femme Fatale. She became interested in street dancing in France when she was a child. Even then she decided that her favorite style was Popping. She went to college in Chicago, so later on she developed and trained in America. She took a lot of part in various competitions and later worked with such artists as Madonna, Justin Bieber, Busta Rhymes, Ne-Yo, Celine Dion, and others. She has also appeared in films and worked as a choreographer in popular TV shows.

Top breakdancers in the world of the latest years

What about top break dancers who get their popularity last few years? Let’s take a look at a few of the most prominent ones. Ali Ramdani, known as Lilou, was born in France in 1984. He first became interested in dance as a child when he saw a performance on TV. Together with his friends in 1999, he founded the Pokemon Crew, a breakdancing team that today has no equal in the world.

In 2005 he took part for the first time in Red Bull BC One, where he won. In 2009 he was able to regain the title (the only one in the world to win this competition twice).

He conquers with his swagger, which is combined with a great sense of humor. Rare battles with his participation pass without impertinent banter that makes the whole audience laugh. His dance routine utilizes classical footwork with power technique. He is known for a move that looks like an “airchair”.

Today Lilou not only dances, but also promotes breakdancing, starring in semi-documentary films. Fouad Ambelj aka Lil Zoo was born in Casablanca, Morocco, and lives in Austria. In 2008 he became a dancer by coincidence. Children in the neighborhood were doing breakdancing, and Lil Zou was fascinated by it. Later he began to train with a popular b-boy Yoriyas, with whom he later faced more than once in battles.

In 2018, he succeeded in winning the RedBull BC One World Finals title.

The hallmark of Lil Zu is positivity. His smile comes out on the dance floor before the dancer himself, which can speak of the man’s cordiality and friendliness. He is always energetic and fresh, and his energy energizes everyone around him. He is able to move quickly and dynamically, stopping sharply in the frieze, without falling out of the music, which gives his style more spectacular. B-Boy Physicx was born on August 23, 1984, in South Korea and currently resides in Seoul. He has a huge number of wins and awards, which makes him one of the best B-Boys in the world. He is a member of the Korean team Rivers Crew and also used to be a member of the legendary Korean team Project Soul. BBoy Physicx himself invented and implemented in breakdancing many elements and movements, most of which are technically very complex. Cico’s real name is Mauro Peruzzi. Bboy CICO is a member of the Red Bull BC One All Stars. He began training in 1995 and is currently a member of Spinkings. CICO has participated in numerous events, including RED BULL BC ONE 2005, 2007, 2008 and won major battles in Europe.

With his 25 turns on one arm, this b-boy from Italy left his name in the list of world records and in the minds of thousands of break fans for a long time.