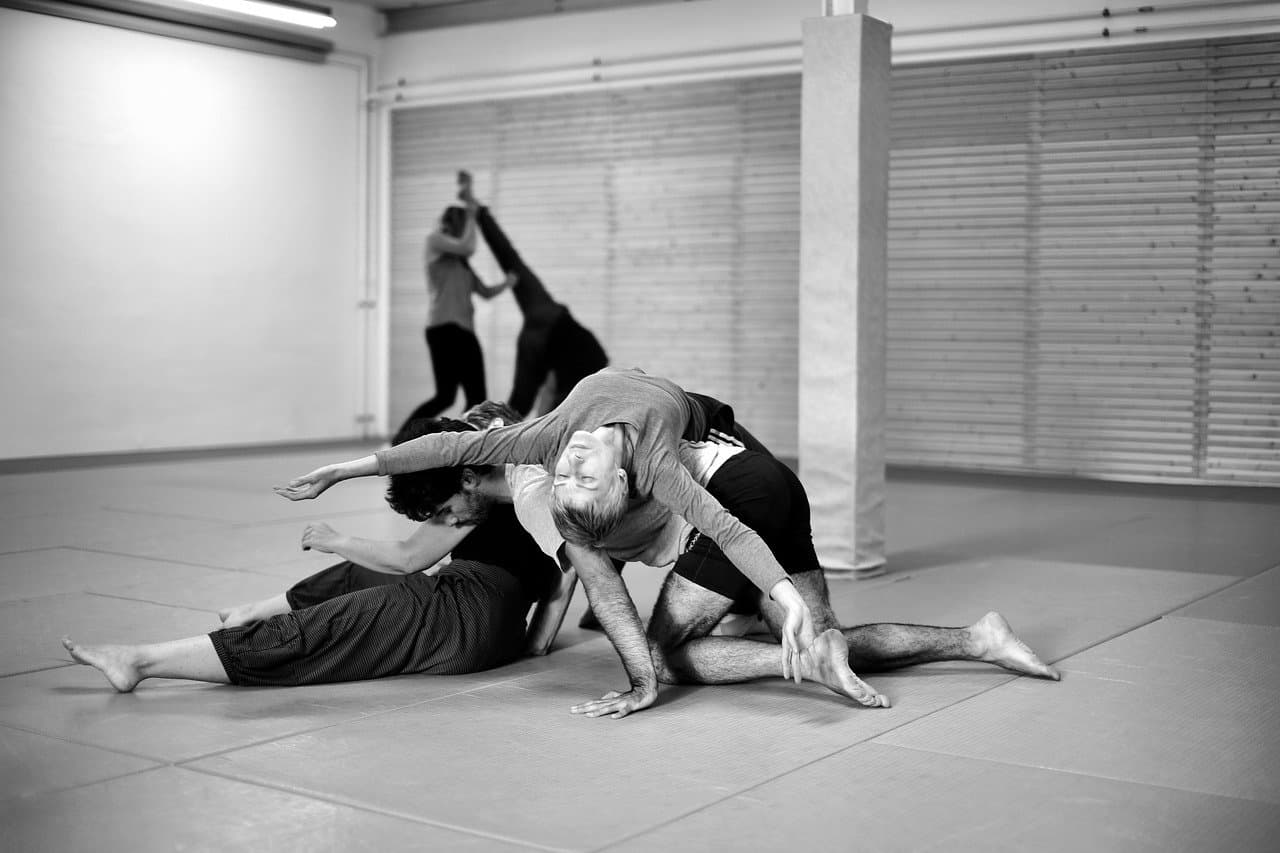 Here you’ll find the fullest information about dancing contact improvisation, its history, rules, exercises, and many others.

Contact Improvisation (CI) – is an improvised dance form that is based on real-time communication and a point of physical contact between two people or more. Dancers improvise in physical contact using elements of dance, acrobatic and martial arts.

It’s better to see once than try to understand through the words:

So the two main elements of CI are:

CI can be used just as searching for material to choreographies but it is also a kind of social dance form.

To understand the whole idea of CI, let's take a closer look at the history of its origin and development.

CI is quite a young direction in the art of free dance. 1972 was the year Steve Paxton founded contact improvisation. In January of this year, together with several male students at the University of Oberlin, he presented a 20-minute, first in the history of CI, dance performance "Magnesium". The performance consisted of unexpected things: participants constantly collided, threw each other, jumped, rolled on the floor, and on each other.

A few months later, Paxton assembled a laboratory of 15 people. They researched the movement and found ways to interact with partners. Initially, they studied how the body works, how gravity works, the physical capabilities of a person, how the human body reacts to living situations (falls, collisions, danger, etc.). Paxton's first works in contact were different from the further development of CI: movements were faster and more unexpected.

Over time, the feeling and the flow of movement became longer. It was more time to feel what was happening.

At the beginning of the CI movement, performance participants almost never used music. The point was to listen to "music" that comes from within you.

They took away everything we think is a dance, and the dance stayed. What does it consist of? It turned out that there are a lot of things in it: the physics of the human body, its interaction with the laws of physics - earthly attraction, acceleration, centrifugal force... There is also the anatomy of movement and what is born in people when they meet. A huge space for research was found.

Then they started experimenting: what happens if you don't make the body dance, but see what it can do on its own? And they discovered that there is a dance that it always performs, and they called it the "small dance". When a person is standing, as it seems to him, motionless, millions of small reflex inclusions work in the muscles, which we have almost no control. The body is constantly balancing relative to the state of equilibrium so as not to fall. The body is dancing! Then they began to investigate what happens to a person during a fall, landing, jump, how to make support without making too much effort, and so on.

As a result of the research, the group presented a new performance, which Paxton called "Contact Improvisation". The dancers performed at John Weber Gallery in Manhattan, during the broadcast of the film by George Manupelli, Dr. Chicago.

After presenting this work, the band members began touring in the states and Europe and practicing CI with new members, spreading and popularizing this movement. Among Paxton's supporters were quite famous dancers at that time: Kurt Siddal, Nancy Stark Smith, Nita Little, Karen Rudler, and others.

However, Paxton didn't standardize and formalize this form of dance in any way. Leaving the CI system open, Paxton allowed the CI to evolve and the participants to bring something of their own into the improvising dance. Today, contact improvisation is danced in the form of a performance or in the form of "jams", where people can both participate in the dance and act as spectators, and change roles at any time.

Despite all its freedom from rules and requirements, contact improvisation still has some specific features and several techniques. But these techniques do not limit you, but rather provide a basis for interaction between partners.

We can say that CI is a dialog, the dialog between two people, sometimes even strange. And it begins from listening to each other without having asked to add anything to it, without thinking, planning, or navigating. There is a flow of information between them.

Contact improvisation is opened for a physical exploration that consists of weight sharing, losing and regaining balance, playing with momentum, and other surprises. Through touching and searching for common trajectories, contact improvisation explores concepts such as support, giving and receiving, following and resisting, balance, taking responsibility, and finding a solution

Adults can learn contact improvisation from children. They can move without mental restrictions:

This is not an exhaustive list. There are so many kinds of communication between partners with the help of the body in CI.

Despite the fact that some performances resemble acrobatics, CI is fundamentally different from acrobatics. CI partners try to perform elements with the least effort, that is, with the application of minimal physical strength. The partners' attention is focused on how to get into a "comfortable" position or use the impulse so as not to use muscles or use them with minimal force.

In CI we give and receive information at the same time. So partners always try to understand each other without any words. And it’s not only about physical contact, but it’s also about understanding the intent of any movement.

CI is about the moment, it is about what is happening and any thoughts. Plans and other stuff may cause dancers to lose this contact and maybe to miss out on an opportunity to ride on the right way. And on the other hand, the intent will help these people to stay together. An important part of improvisation is to allow what is happening now to happen. This means not thinking about what will happen in a few seconds, but being right in the moment.

Despite the fact that Paxton and his followers initially studied motion physics, later some of them began to talk about the inseparability of body and mind. This gave rise to the study of physical action as an analog of communication between people in real life. For example, the ability to give one's weight or support another corresponds to the ability to trust others and support others in the daily routine of communication. This space provides connecting with other people in a way that isn't possible anywhere else.

Safety is the most important principle in the framework of CI because, without a sense of security (both physical and mental), no other principle in this direction will work.

In light of the above, CI is a place without judgment. It means doing something mutual without competition, without a fight, without thinking about who is the winner and who is not.

One of the basic rules that participants in CI groups must follow in order to avoid injuries during work is to do the warming up the body and stretching at the beginning of each lesson. And you should avoid rolling over and give weight to your partner's knees, ankles, and head.

CI has a positive effect on the human body, develops and heals it, gives it flexibility, plasticity, strengthens and stretches muscles, fills the body with lightness and vitality. Participants acquire the ability to listen, hear, and understand their own body, which allows them to open up more and act naturally, using movements more effective and less energy-consuming.

In psychological terms, regular attendance at CI classes allows a person, firstly, to learn to trust other people to a greater extent, secondly, to learn to take responsibility for another person, thirdly, to learn how to work, act in pairs, and, in fourth, to unleash your own creativity.

CI is a spontaneous dance form that involves two bodies in motion and is built around a point of contact with a partner. Each such contact and performance is something unique, something that is born here and now. It's the magic of CI and its uniqueness. In search of choreographic material, you can find yourself, contact with the outside world, support, or the ability to “speak” by your body.

So if you have the opportunity to try out the CI on yourself, feel free to try!

And then write in the comments how it is to you.?

For those who want to know more about CI: