The history of dancing, in general, begins with the emergence of culture and even earlier. It is unlikely that we can not call tribal dances around the campfire dances.

15th-century – The appearance of the term “ballroom”

We can say that since the 15th-century dances - the ancestors of ballroom dancing - were born. In the Middle Ages and the knightly era, different kinds of meeting people like balls enjoyed great popularity. At such gatherings, court dances were roundelays, brunl (dance with jiggles and tributaries) and the pavana, which often was performed with candelabra in hand.

But based on an analysis of literary sources found that ballroom dancing and the term "ballroom" itself appeared in the 15th century in Italy and France. They became widespread due to the passion of secular society for balls - secular evenings when men and women gathered to dance.

17th-century, France - dance masters and teachers produce a variety of self-taught dancing. In 1661, by order of Louis XIV in Paris was opened "Academy of Dance" where was testing the knowledge of dancers, issued diplomas, arranged balls and evenings.

In the 70s of the 18th century, the word "waltz" was used to refer to the peasant dance of some regions of Southern Germany and Austria, which since the beginning of the XIX century has become popular in all sectors of society in these countries, especially in Vienna and in the works of Johann Strauss, "king of waltzes". 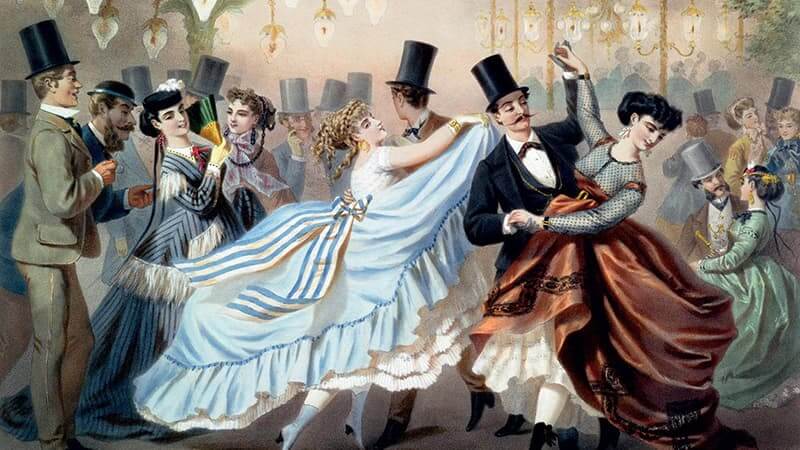 During the 19th century, ballroom dancing gained popularity in many countries in Old World. The waltz emerged as a particularly popular dance, known for its simple movements and exhilarating melodies.

20th-century - the emergence and spread of competitive ballroom dance

More and more kinds of ballroom dancing were appearing, which made it necessary to standardize and systematize them. In 1904 in England there was the Imperial Society of Teachers of Dancing - ISTD.

And already by the 20s of the 20th-century, ISTD decided to standardize the dances known at that time (slow waltz, tango, Viennese waltz, slow foxtrot, quickstep). We can say that even then, the European competitive program of sports ballroom dance formed, as it is today.

In the same years, the first ballroom dancing competitions began to be held. There was a division into competitive and social ballroom dancing. Social dancing has remained a form of non-professional dance.

It is worth noting! England is the rightful leader of competitive ballroom dancing, where the English school of ballroom choreography was founded and still remains important. Blackpool Dance Festival, the most popular and prestigious ballroom dancing competition, is held in England.

In 1935, the Federation Internationale de Dance pour Amateurs - FIDA was organized in Prague. In 1956 the organization broke up, but a year later International Council of Amateur Dancers (ICAD) was founded.

At the end of the 40s of the 20th century, five Latin American dances (cha-cha-cha, samba, rumba, pasodoble, jive) joined the European ones. In the early '80s the term "dance sport" was introduced to denote a competitive form of ballroom dancing.

The 1990s - recognition of ballroom dance as a sport

Further development of ballroom dancing is closely connected with the process of its recognition as a sport and ICAD activities. ICAD was renamed the International Dance Sport Federation (IDSF) in 1990. To date, there are two directions of ballroom dancing - sports, that is, competitive and social. A strictly defined dozen dances of the European and Latin American programs belong to sports dance. Social dances also include bachata, salsa and other types of pair dance.

In modern sports dances, there are many different figures, movements, ligaments, lines that can be used to create a program. The technique of athletes is constantly improving, absorbing the most significant technical aspects of the performance of the best dancers of the past and present. Outstanding dancers and their followers form various schools with their own individual styles. Some of them unite to form their own directions in sports dances. Competition rules strictly regulate the number and complexity of movements and figures in combinations for each of the categories. There are also rules for competitive suits and dresses.